Approximately 80 per cent of patients who have a urothelial tumor of the bladder have a low or high grade papillary tumor which is non invasive (Ta) or is high grade papillary or sessile and invades the lamina propria (T1). The initial presentation is most commonly gross hematuria, which promptly leads to outpatient endoscopy and a subsequent transurethral resection (TUR BT). The goal is complete endoscopic removal of all visible tumors. This can be accomplished a variety of ways depending on the perceived depth of involvement or stage. One can use a cold cup instrument with subsequent cauterization, monopolar or bipolar loop resection, and adjunctive blue light or narrow band imaging (NBI) to aid white light endoscopy. Despite the goal of a complete resection there is a high chance of a subsequent tumor event; commonly termed a recurrence. There are several reasons for this: 1. Incomplete resection, 2. Missed tumor, 3. Tumor implantation on the altered urothelial surface, and 4. The continued effect of carcinogens on the urothelium. The urologist has an important role in minimizing the chance of a “recurrence”. This includes diligence in performing a “complete” initial resection, use of blue light or NBI if available, consideration of postoperative intravesical chemotherapy (POIVC), and emphasis on smoking cessation.

The following case is a common one and suggests one of the options for removing tumors in an elderly patient with recurrent Ta bladder tumors. We invite our readers to review and comment on the case and management by using the online comment section below the case: https://www.bladdercancerjournal.com/challenging-cases. 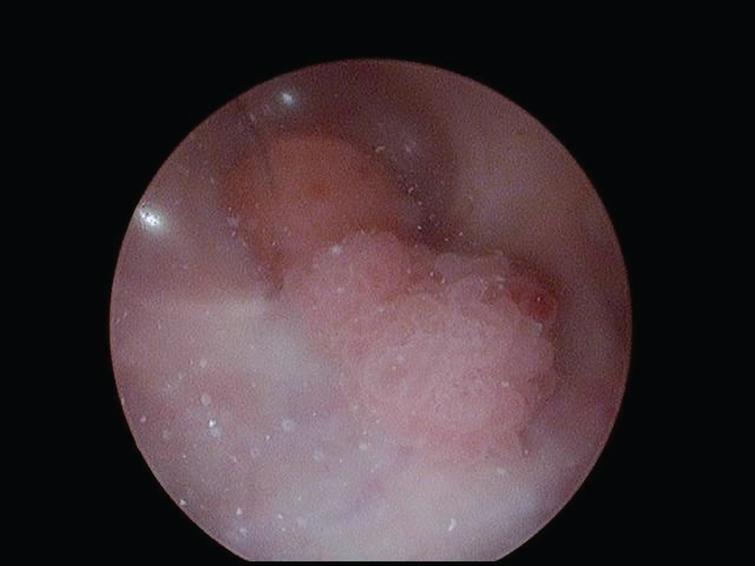 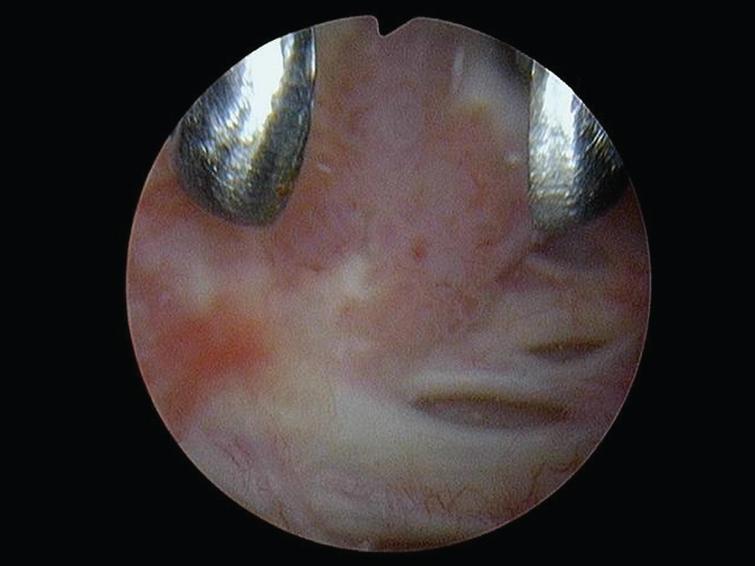 The button is used to cauterize remaining tumor and base of removed tumors. 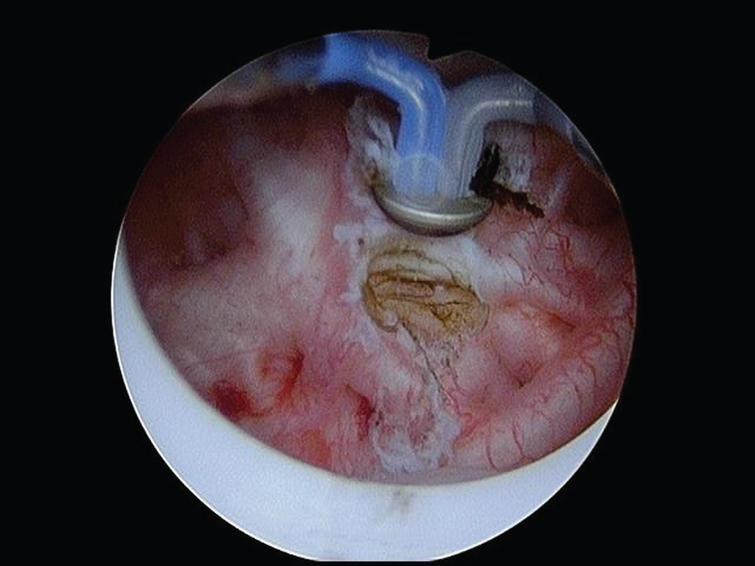 The patient is a 95 year old man with multiple medical problems, which include chronic obstructive pulmonary disease and mitral regurgitation. Despite his age and co morbid diseases he lives independently. He has few voiding complaints other than nocturia.

Tumors all removed with the cold cup biopsy forceps.

He has a several year history of grade 2 and 3 Ta papillary tumors. His most recent TUR BTs were Sept. 2015, September 2016, August 2017, and November 2017. He had one six-week course of BCG followed by maintenance in 2016 after resection of mostly grade 3 Ta tumors. In March 2018 I performed the most recent office flexible endoscopy, which revealed multiple papillary low grade (1-2) appearing Ta tumors.

The patient was taken to the operating room for a TUR BT. Prior to the procedure I had my customary consultation with the anesthesiologist as a part of my preoperative check list and requested that the patient be paralyzed either with general endotracheal tube anesthesia or a spinal anesthetic. It is most important that the patient remain still during the procedure. Perforation during a TUR BT should be a rarity as long as the urologist has proper equipment, controls the bladder volume, i.e. keep the bladder at half volume during the resection, and does not have to contend with bladder motion.

In this case I elected, as I commonly do, to use the cold cup biopsy forceps to remove most of thepapillary tumors. This provides a nice specimen devoid of cautery for the pathologist and minimizes the risk of creating a deeper opening in the bladder than necessary. This is a patient who has never had an invasive tumor and has had multiple prior resections. Once the majority of the tumors were removed I used the bipolar button to cauterize the base of the resected tumors and vaporize remaining small papillary tumors. I used the bipolar resectoscope since the patient had a pacemaker. I used both white light and NBI during and after the procedure to help ensure a complete resection. I always begin and conclude each TUR BT with a survey of the bladder with a 70-degree lens. I use either a 12 or 30-degree lens during the TUR BT depending on the tumor location.

2. What type of anesthesia do you prefer?

3. Do you prefer monopolar or bipolar resection?

4. Do you utilize blue light or NBI and when?

5. Do you use the cold cup to remove bladder tumors?

6. When do you give postoperative intravesical chemotherapy?