This 73-year-old man presented to his primary physician with a one month history of intermittent gross hematuria. He was promptly referred by an excellent community urologist. A CT scan indicated high grade right ureteral dilatation to the level of the urinary bladder (Fig. 1). There was a filling defect in the bladder (Fig. 2). There were no enlarged pelvic or retroperitoneal lymph nodes. A chest x ray was normal. 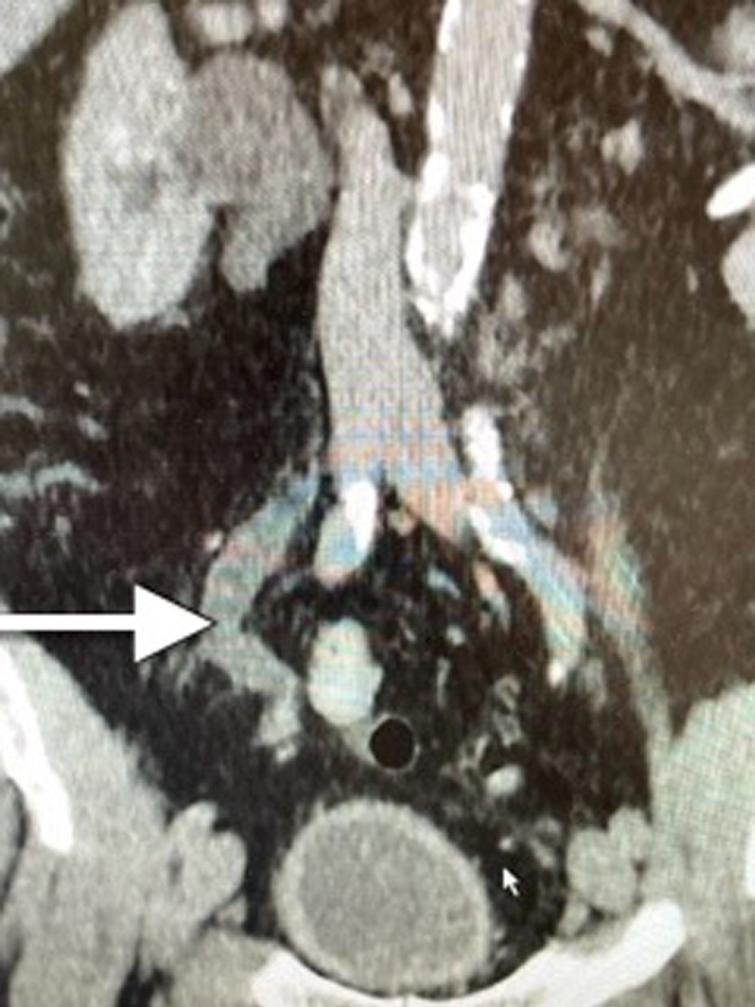 CT scan indicating the large tumor located at the trigone and obstructing the right ureter. The arrow points to the tumor. 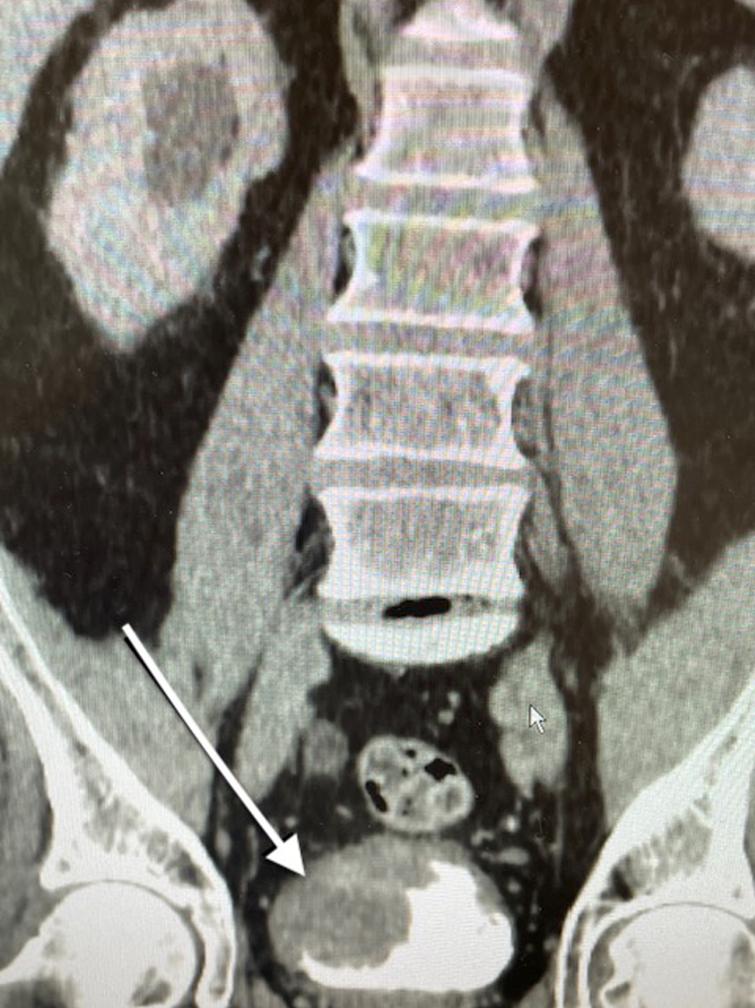 This patient was a former cigarette smoker with a 35 pack year history. He did not have cardiac or pulmonary problems. He had not had any prior surgery and was moderately overweight. His serum creatinine was 1.6 with an estimated GFR of 42 ml/min. He was not anemic. He was on medication for high blood pressure and type 2 diabetes mellitus.

The urologist performed an office flexible cystoscopy and identified a moderately large mixed papillary and sessile tumor occupying the right trigone. A biopsy indicated high grade urothelial cancer. Given the small biopsy material there was no information other than the endoscopic appearance and the presence of hydronephrosis to suggest the stage. When the patient was referred the urologist indicated he was certain the man had a muscle invasive urothelial cancer.

I had a lengthy discussion with the patient and his wife. They were well informed as are many patients who survey the internet prior to seeing the physician. We discussed proceeding with a transurethral resection of the tumor (TURBT) to confirm the extent, i.e., stage, of the tumor and potentially perform a “complete” TURBT. I discussed the patient with a medical oncologist and then spoke again with the referring urologist who was certain this was a T2/T3 cancer. My initial approach, as per the guidelines for a muscle invasive urothelial cancer, would be a TURBT to confirm a muscle invasive urothelial cancer and proceed with neoadjuvant cisplatin-based chemotherapy. I usually discuss the alternative of bladder preservation with chemotherapy and radiation if there is a “complete TURBT” and there is favorable histology. The presence of hydronephrosis implies pT3 cancer and is a relative contraindication for success with bladder preservation though the current SWOG S1806 trial allows for unilateral hydronephrosis.

The medical oncologist indicated that his diminished renal function would prohibit cisplatin. I considered proceeding with a TURBT and hopefully placing a ureteral stent or alternatively a nephrostomy with the possibility that the patient’s renal function would improve. This approach would, of course, delay proceeding with a cystectomy but might lead to improvement in renal function permitting cisplatin based neoadjuvant chemotherapy. I had a detailed discussion with the patient and his family regarding the alternative approaches.

I did not proceed with another TUR BT. The patient agreed to proceed with a cystoprostatectomy and urinary diversion. I discussed the advantages and disadvantages with an ileal conduit and orthotopic neobladder. I particularly addressed the need for intermittent catheterization in 15% of patients who have a neobladder. Nighttime incontinence is frequent with a neobladder although daytime continence is expected. I try to have the patient speak with other patients who have had a urinary diversion. He availed himself of this opportunity and found it helpful. He also visited the bladder cancer advocacy network (BCAN) on line. I provided the BCAN handbook which is an excellent resource.

I performed an open radical cystosprostatectomy (Fig. 3) and orthotopic neobladder using the Hautmann W technique with each ureter anastomosed to the ipsilateral short non detubularized limb. I performed a bilateral pelvic lymph node dissection to the level of the common iliac vessels. I left the ureteral stents in place for two weeks and the urethral catheter was removed four weeks postoperatively. The post operative course was initially uneventful as he was discharged on postoperative day six. He was readmitted three days later with “pouchitis”. He was afebrile but had nausea and an elevated white count. Most of the urine was exiting via the ureteral stents and was clear however irrigation of the urethral catheter revealed dark copious mucous. A CT scan did not show any abnormalities with the exception of dilated loops of small and large bowel. Irrigation of the neobladder and antibiotics resolved the episode. 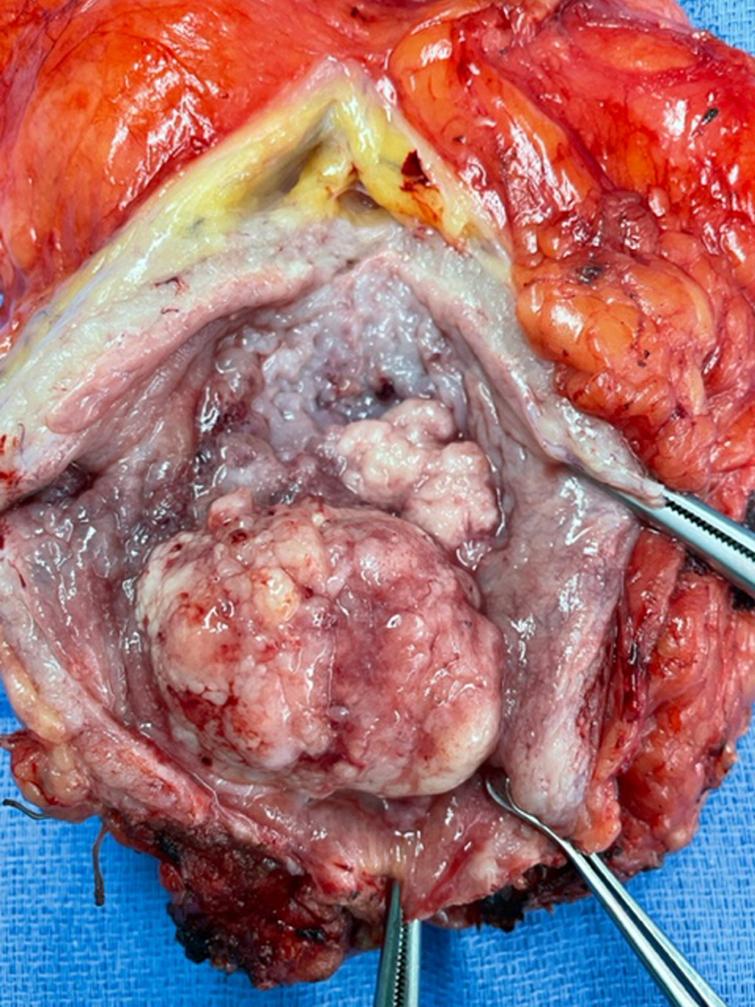 The pathology from the bladder revealed a high grade papillary urothelial carcinoma with prominent micropapillary pattern. The tumor was invasive through the muscularis propria into the perivesical fat. There was extensive carcinoma in situ (CIS) as well as multifocal high grade papillary urothelial carcinoma throughout the bladder. There was lymphovascular invasion. All margins including the distal margin were negative. There were no lymph node metastasis (Figs. 4– 6). 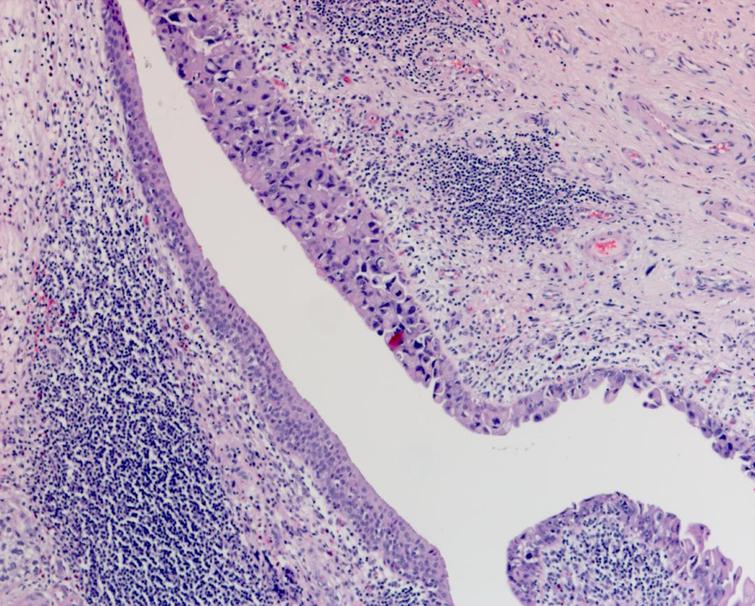 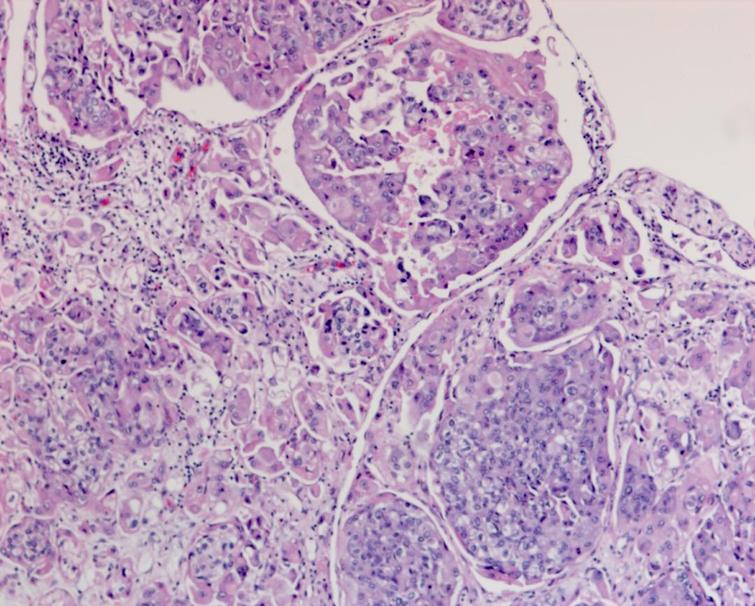 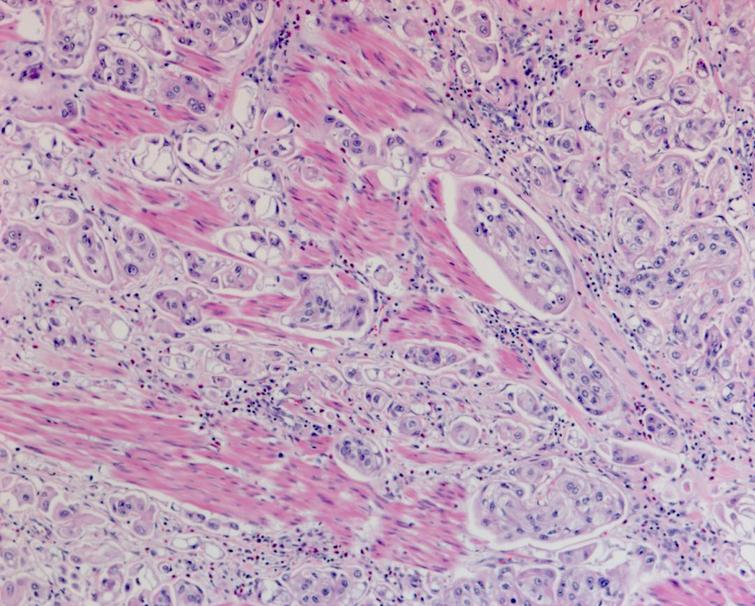 Given this pathology report should he receive adjuvant systemic therapy? Although there are a number of non-randomized comparative reports comparing the use of adjuvant chemotherapy or immunotherapy to a non-treated population which suggest a progression free survival advantage, the overall survival difference is less impressive. The patient’s creatinine has decreased to 1.31 with an eGFR of 53. He will have a consultation with a medical oncologist to discuss these alternatives. Given the favorable side effect profile of immunotherapy and the similar activity to cisplatin based chemotherapy in locally advanced and metastatic urothelial carcinoma I would favor starting with one of the PD1 inhibitors. The immunotherapy drug nivolumab is now FDA approved for use as adjuvant therapy for patients at high risk of recurrence post cystectomy. The guidelines, however, still suggest cisplatin based chemotherapy as first line when adjuvant chemotherapy is indicated. In my experience immunotherapy is better tolerated as adjuvant therapy.

There are several discussion points in the care of this patient, and I look forward to comments.