RS is an 81 year old man with a history of low and high grade Ta bladder cancer in 2010. He was free of any bladder cancer until 2020. He had routine office cystoscopy and cytology through 2016 with urinalysis only from 2016 to 2020.

He has chronic atrial fibrillation and coronary artery disease. He has had two cardiac stents placed. He takes coumadin. He had a brief admission for gross hematuria in 2014 but the bleeding resolved. His creatinine was 2.80. A non contrast CT scan showed two small kidneys consistent with medical renal disease. The scan also revealed an enlarged prostate and a long standing large right inguinal scrotal hernia (Fig. 1). The hernia has been present for many years with minimal symptoms. The patient did not want it repaired. His creatinine at that time was 2.80.

a. CT scan indicated two small kidneys, no hydronephrosis and a small bladder with a urethral catheter. b. A large right inguinal scrotal hernia.

In October 2020 the patient again presented with gross hematuria. The chronic renal failure had progressed with a serum creatinine of 3.80 and an estimated GFR of 18 cc/min. A non contrast CT scan had not changed. Cystoscopy revealed multiple papillary bladder tumors which were diffusely present throughout the right lateral wall and right trigone Fig. 2. A transurethral resection was performed. The pathology was high grade T1 urothelial carcinoma with anaplastic and squamous cell carcinoma variants (Fig. 3) Muscularis propria was present and not involved. 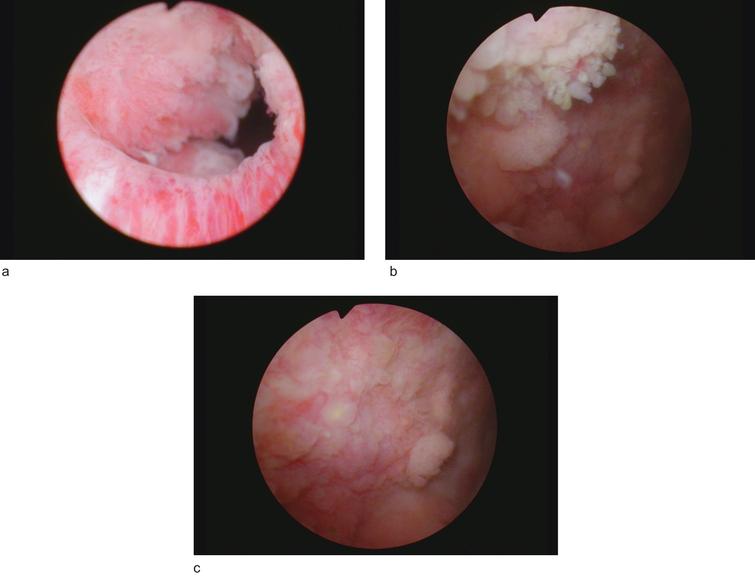 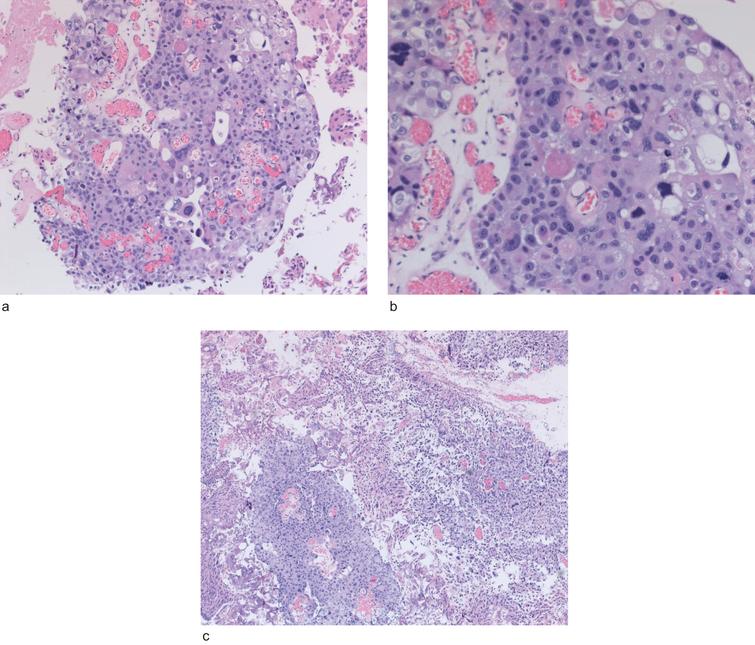 He did well for 7 days after his catheter was removed but returned with gross hematuria requiring clot evacuation and cauterization of two areas of prior resection. He was discharged but readmitted for hematuria again.

Despite the aforementioned co morbidities the patient has a good performance status. He is an attorney and is still working. His mental state is excellent. His cardiologist provided medical clearance for surgery as his cardiac function is good despite chronic atrial fibrillation.

The dilemma is how to manage recurrent gross hematuria associated with multifocal high grade T1 bladder cancer in an 81 year old man with stage four renal failure. There is also the consideration of the large scrotal hernia. I was not certain he had a complete TUR BT. His bladder urothelium appeared diffusely altered from the chronic changes from BPH and outlet obstruction as well as the residual trauma to the urothelium from the TUR BT and the subsequent cautery.

The alternatives were to wait for the hematuria to resolve which would require him to stop anticoagulation and hopefully perform a reTUR BT to ensure accurate staging and then give BCG or proceed with a cystoprostatectomy with urinary diversion (ileal conduit or cutaneous ureterostomies).

I elected to proceed with the second choice (Fig. 4). The diversion was with bilateral cutaneous ureterostomy with the two normal caliber ureters. The large scrotal hernia was repaired without mesh. His postop course was prolonged with an ileus despite the absence of a bowel resection. His serum creatinine rose postoperatively to 5.50 but fortunately dialysis was not required. At discharge the creatinine was 4.50. 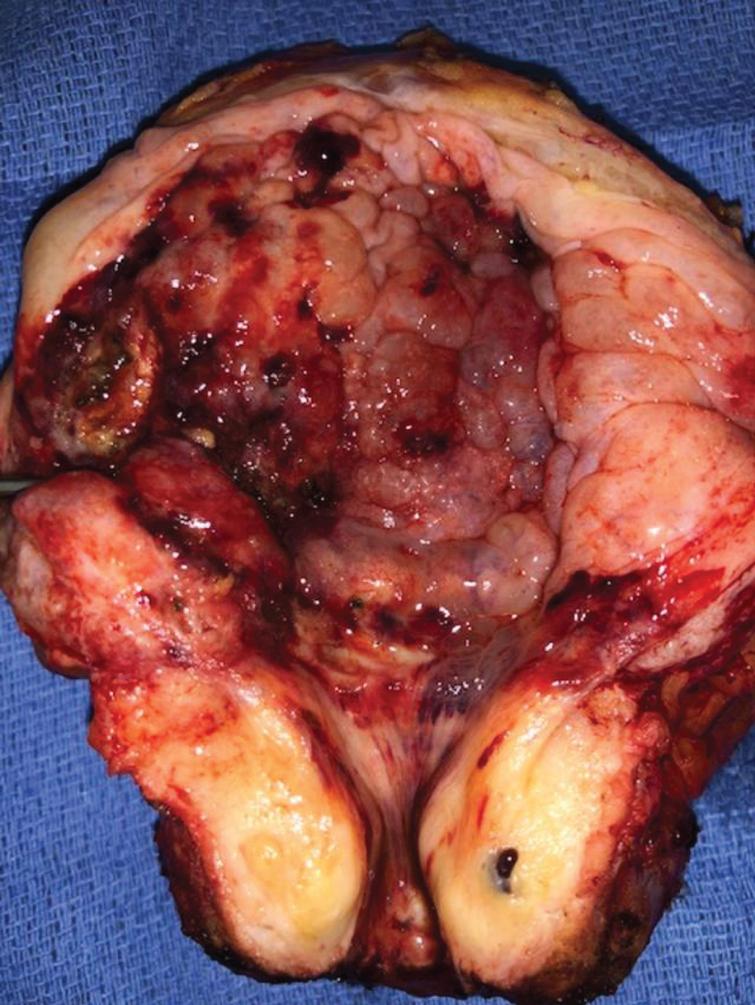 The pathology indicated residual high grade T1 urothelial cancer with multifocal carcinoma in situ. The surgical margins and lymph nodes were negative for cancer. The prostate contained Gleason score 6 adenocarcinoma of the prostate.